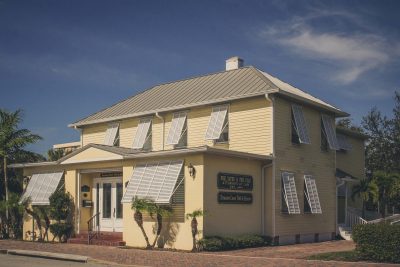 In frontier Florida, land titles were the province of lawyers who personally searched titles at the Courthouse or bought searches from Court Clerks. Closings were concluded based upon Attorneys’ Opinions on Title. SLT began as a joint venture of two pioneer lawyers, Fred Fee and Elwyn Thomas. Upon incorporation of their venture in 1921, the principal owner was Emma Morgan Fee (spouse of Fred Fee). In 1929, SLT engaged a non-practicing lawyer, Guy O. Nourse, to operate and manage SLT. The ownership of SLT was gradually sold to Mr. Nourse during the 1930’s.

In 1951, Guy O. Nourse was joined in the SLT business by his son and practicing lawyer, Philip G. Nourse. The company prospered, and following the death of Guy O. Nourse in 1955, continued in operation through his son. In 1977 Philip G. Nourse was appointed Circuit Judge, and TCT was incorporated to lease, operate, and manage the business assets of SLT. In 1978, Frank H. Fee, III, a practicing attorney and son-in-law of Judge Nourse, became President of the company. The principal owners of TCT are Fee, III and spouse, LeVan Nourse Fee, daughter and granddaughter, respectively, of Guy O. Nourse and Philip G. Nourse. Attorney Frank H. Fee, IV, has joined as principal owner. He is great-grandson and grandson, respectively, of the original principals of the SLT affiliate company, Fred Fee, and Guy O. Nourse. Land files and records of TCT date from the 1920 decade and its first Florida land boom.

Perhaps no Florida title insuring agency now in business can claim such a history of continuous success and service in the handling and insuring of land title transactions.

Hank joined Fee, DeRoss & Fee, P.L., n/k/a Fee, Yates & Fee, PLLC and Treasure Coast Title in 2002. He has been active in the practice areas of commercial and residential real estate law, mortgages, and mortgage foreclosures, for both residential and commercial properties, title insurance law, contracts, bankruptcy, banking, finance. He is primary Manager of TCT. He holds a B.A. degree from Georgia Southern University and a Juris Doctor degree from Florida Coastal School of Law.

Frank is senior attorney of Fee, Yates & Fee, PLLC. His practice focuses on banking, finance, real estate and mortgage transactions. A life-long resident of the Treasure Coast area of Florida, he has practiced law in the region for more than 40 years. In 1969, he began his law career as Bank Counsel to First Federal Savings and Loan Association of Fort Pierce, predecessor of Harbor Federal Savings Bank, for which he served as Director and Vice-Chairman from 1986 to 2006. Frank later served as a Board member, Vice-Chairman and Bank Business Counsel, of Harbor Community Bank from 2012 until 2018 upon its merger into CenterState Bank, N.A. He has a Juris Doctor degree from the University of Florida, and an A.B. degree from Davidson College.

Le Van practically grew up in her father’s Earliest Public Records title plant. At an early age, she typed instrument take-offs and posted them in land tract books. She graduated from Indian River Community College and attended the University of Florida. She has served the company since its inception in 1978.

Stacy began her career following college employed by a Thrift Bank Institution in its Mortgage Service Department. This provided her initial experience with real property titles, legal descriptions and title issues. In 1990 she engaged as a paralegal with a well-regarded real estate lawyer until January 2002. She then was employed as a paralegal and title insurance specialist with another law firm specializing in real property in St. Lucie County until Stacy joined Treasure Coast Title in October 2016 as Title Transaction Manager with responsibility for issuance of title commitments and policies, as well as for preparing and conducting transaction closings.

Jenny first came to know the Title Business while working for Treasure Coast Title in High school and later while attending Indian River Community College. While attending University of Central Florida she was employed by one of the Country’s largest Mortgage Companies’ Title Insurance division. She earned her B.A. Degree in Organizational Communication from University of Central Florida. In addition to business development, Jenny is valued as a transaction preparation and closing assistant. She is proud to be a part of the tremendous growth of such a legacy business.